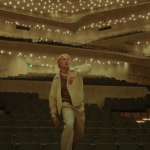 Electronic music maestro Solomun is set to release his first album in eleven years in early 2021. ‘Home’, the captivating ...

Hugo Paris reveals the joyful, nostalgia inducing video for his debut single, ‘Music Saves The World’. Soundtracked by this recent ...

Galantis, a collaborative project led by Christian Karlsson, is a certified visionary in modern dance music. The chart topping and ...